Introduction to the brain. Part 2: the basal ganglia

The basal ganglia and movement

The basal ganglia is in charge of voluntary movement. We all assume that all we have to do move some part of our body is think about it. For example, once you decided to look at this article, your hand moved the mouse and your finger clicked on the button. Easy. This happens tens of thousands of times a day and life would be unimaginable without it. This requires an incredibly sophisticated and delicate piece of machinery. The basal ganglia works in a slightly counter-intuitive way. The ordinary function of the basal ganglia is to inhibit movement. When you want to move a part of your body, the inhibition is turned off, like removing a cap. When the basal ganglia is working like it should, you move your limbs when and only when you want to. When something goes wrong, two things can happen. Either you find it hard to move the parts of your body when you want, or they move even when you don’t. The two most famous examples of this happening are Parkinson’s and Huntington’s diseases.  Studying victims of these currently incurable illnesses is one of the most important ways that neuroscientists can learn more about how the basal ganglia works. 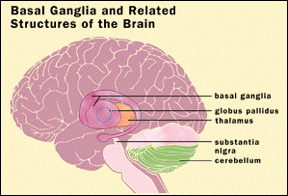 As we saw last week, different parts of the brain aren’t like specialists who do only one thing. You’ve probably heard of dopamine, the so-called ‘happy chemical’. Most of the dopamine in the brain is both sent and received within the basal ganglia. Dopamine functions like an internal reward system for your brain. If it does the right thing, it gets a hit. This trains you to the right thing. On the other hand, if the basal ganglia is not functioning as it should, then it might be training you to do the wrong thing! Particularly important for my work, some of the most addictive drugs, such as cocaine and nicotine, function by hijacking your dopamine system. The basal ganglia also plays a central role in controlling the eyes.

Last week, we saw that memory, taste, smell and emotion are all linked by the limbic system. I’ll leave you to speculate on what links there might be between the different functions controlled by the basal ganglia.

JD Murphy specializes in couples therapy and addiction treatment. For therapy in Pineville, LA, call today or fill in the contact form and click send.