Introduction to the brain. Part 3: the prefrontal cortex

Fresh from looking at the limbic system and basal ganglia, this week we will take a look at the prefrontal cortex. This fearsome sounding phrase just means the part of the brain at the very front, right behind your forehead. As we discussed in the previous two weeks, it’s impossible to narrow down any part of the brain to just one function, and the prefrontal cortex is no exception. Nevertheless, for nearly a century and a half, the prefrontal cortex has been particularly associated with what cognitive scientists call ‘executive function’. For instance, let’s say you feel like watching television, or having a sandwich, but your wife asked you to clear the yard. How do you decide what to do, and in which order? The central role of the prefrontal cortex in making decisions like these was discovered by accident in a tragic incident nearly one hundred and sixty years ago. 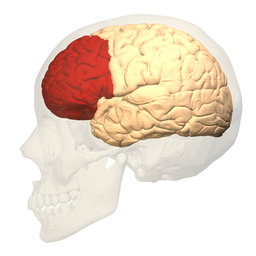 The curious case of Phineas Gage

Phineas Gage was a railroad foreman. One day, while blasting rocks with his colleagues, an iron rod shot through his brain and came out the top. Miraculously, he survived, but much of his prefrontal cortex was destroyed. After his recovery, Gage’s friends and coworkers started to notice something odd. His technical skills were unchanged, and he seemed as intelligent as before, but his personality was different. Previously known as hard working and responsible, he became unreliable and impulsive. He was unable to hold down a job. This fueled speculation that the front of the brain has a special role in the ‘higher’ elements of the human personality.

As so often, the problem with this neat historical anecdote is that it’s not 100% true. First, historians have shown that the legend of Gage’s transformed personality was exaggerated far beyond what we find in eyewitness accounts. His personality did change, but he never became the foul-mouthed, brawling drifter of yore. Secondly, and more interestingly, Gage actually got a lot better. In 1852, he left for Chile and got a job as a stagecoach driver. His workday involved following a detailed routine, and this seems to have helped the pathways in his prefrontal cortex recover. The self-destructive behaviors Gage exhibited in the years after the accident receded and he started to get back to his old self.  By sheer chance, his job prefigured rehabilitation therapies only pioneered after WW2. Phineas Gage’s story shows more than that damage to parts of the brain can affect the human personality. It also shows that the right therapeutic environment can heal the brain itself.

Maturity and the prefrontal cortex

Many parents wonder how adolescents and young adults can be ‘so clever and yet so dumb’. The prefrontal cortex helps to explain why. As you grow up, your brain grows up with you. However, it doesn’t grow up all at the same time. In fact, it matures from back to front. The prefrontal cortex doesn’t finish developing until you are 25. So if your eighteen year old is a maths whizz, but a terrible decision maker, try waiting a few years.

JD Murphy specializes in couples therapy and addiction treatment. For therapy in Pineville, LA, call today or fill in the contact form and click send.